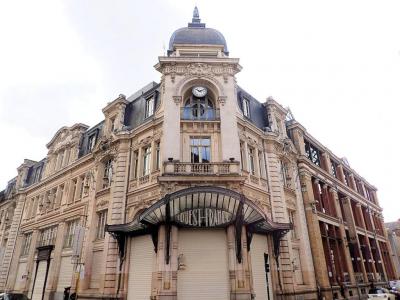 Ouest-France is a daily provincial French newspaper, known for its emphasis on local news and events. It was founded in 1944 by Adolphe Le Goaziou and others, following the closure of Ouest-Éclair, which was banned by Liberation forces for collaborationism during the war.

Located on the corner of two streets, the building of Ouest-France stands between an impressive construction, built in travertine, limestone and granite, on one side and a manufacturing workshop, which lacks any ornamental pattern, built in bi-color brick, on the other side. At the entrance of the building, there is a beautiful wrought iron appentice in art nouveau style, with the inscription “Ouest-France”. Don't miss the opportunity to admire each detail of this fabulous architectural marvel in the city of Rennes.
Image by Sémhur on Wikimedia under Creative Commons License.