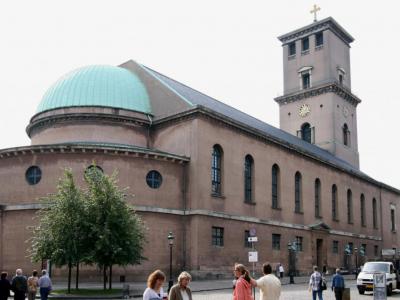 Our Lady's Church and Square, Copenhagen

Situated next to the historic main building of the University of Copenhagen, Church of Our Lady is among the prominent religious landmarks in the city. While less dramatic than the typical Cathedral, its marble stations of the cross far better depict the suffering of Jesus than most and the large organ is an impressive sight. Outside, it looks a little like the Pantheon in Rome, with statues of David and Moses on either side of the doors.

Constructed in 1829, the present church was rebuilt in the then-modern neo-classical style following a British bombardment during the Napoleonic wars. Measuring a hefty 33 m in width and 83 m in length, it can seat at least 1100 people if all galleries are left open. There are four church bells housed in the tower, one of which is the heaviest in Denmark at 4 tons.

The interior is decorated with the twelve apostles (one in front of each of the piers of the central nave), the Risen Christ displaying the wounds in his body (in a niche above the altar) and the baptismal font in the form of an angel holding a large scallop shell, all in Italian carrara marble. All of these sculptures were completed in Rome by the famous Danish sculptor Bertel Thorvaldsen, whose bronze bust is on display in the aisles along with many portraits of bishops and deans.

Why You Should Visit:
This church is of very severe exterior appearance but upon stepping inside, you become engulfed with the beautiful lighting and outstanding decorations, statues, altar, columns, ceiling and arches.

Tip:
If possible, try to come during the jazz service on Sunday, as part of the yearly Copenhagen Jazz Festival – but come early. That's an event you will remember forever: informal and at the same time very inspiring.