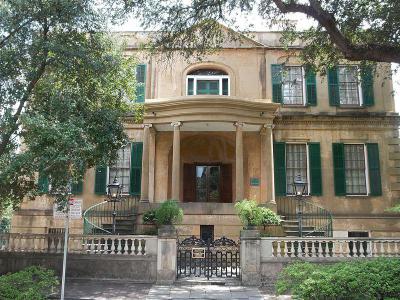 The historic Owens–Thomas House in Savannah, Georgia is one of the finest examples of English Regency architecture in the United States.

The building was completed in 1819 to a design by William Jay, an English architect. His plan was to create a house aesthetically compatible to Bath, England, which is evident in the use of the Bath stone as well as in the sophisticated architectural detail that was meant to add a gentrifying physical ornament to the then-newly emerging Southern port of Savannah. The structure is notable for its early cast-iron side veranda with elaborate acanthus scroll supports on which the Marquis de Lafayette addressed the citizens of Savannah on his visit in 1825.

The house was originally named for its first owner, Richard Richardson, whose family had earned fortune as cotton merchants and bankers. In 1830, the mansion was purchased by the local attorney and politician, George Welshman Owens, and remained in his family for several decades until Owens' granddaughter, Margaret Thomas, bequeathed it to the Telfair Academy of Arts and Sciences, in 1951.

In 1976, the house was designated a National Historic Landmark. Complete with the Slave Quarters, which were uncovered and restored during renovations in the 1990s, the property is now a museum. Its collection contains furnishings and decorative arts from the English Regency period, including possessions of the Owens family dating from 1790 to 1840. Among other exhibits here are English Georgian and American Federal period furniture, early Savannah textiles, silver, Chinese Export porcelain, and 18th- and 19th-century art.

The museum's highlight, though, is the carriage house that once functioned as slave quarters – one of the earliest in existence and best preserved in the American South. Previously inhabited by servants like the nanny, cook, butler and other enslaved workers, the place features slave artifacts of the period.

Although architecturally insignificant, the Slave Quarters is culturally and historically important as the showcase of the African slaves' attempt to maintain their ethnic heritage. The ceiling of the building is painted haint blue, which was customarily used in Gullah culture to deter ghosts or other malevolent spirits.

In the courtyard you can see a small parterre garden designed in 1820 English-American style.

The place is open Sunday through Monday from 12–5pm; and Tuesday through Saturday from 10am–5pm.

Tip:
Museum tours go off every 15 minutes – so try to go with a smaller group!
You can also get a pass to see the Jepson Art Center and the Telfair Museum of Art for a single price of $20 in the space of one week.
Image Courtesy of Wikimedia and Ebyabe.