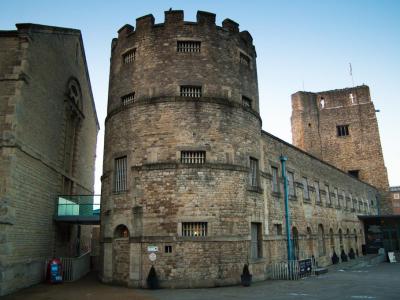 Oxford is justifiably proud of its heritage and spends a lot of time and effort on the upkeep of its ancient buildings, as you will see when visiting Oxford Castle. This partly ruined Norman castle stands on the outskirts to the west of the town, just off New Road. At the beginning, it consisted of a wooden motte and bailey castle, but this was replaced by stone buildings in the 11th century.

During the war between England and Normandy in 1135-1153, the castle was used by King Henry I’s daughter, Empress Matilda, as a base during her bid to win the English crown from her cousin, King Stephen. Stephen surrounded the castle with siege-engines, but Matilda escaped and the castle’s occupants surrendered before a battle could get underway.

During the 13th century the defenses were improved, the Round Tower was built and the chapel restored. King Henry III used it as a prison. The castle was mostly destroyed during the English Civil War, and was continued to be used as a prison after the end of the war.

In 1888, the prison was expanded and became HM Prison Oxford until 1996, when it closed for good. Today, only the motte and St George’s Tower remain of the original castle.

The buildings of the prison have been converted into a luxury hotel, offices, a shopping center and the heritage complex. In the courtyard there is an open market and often theater performances are held here.

The castle also offers guided tours with guides in costume dress who will explain the castle’s history, as you climb to the top of St George’s Tower, visit the crypt and the motte with its vaulted Well Chamber.
Image by Douglas Neiner on Flickr under Creative Commons License.
Sight description based on wikipedia