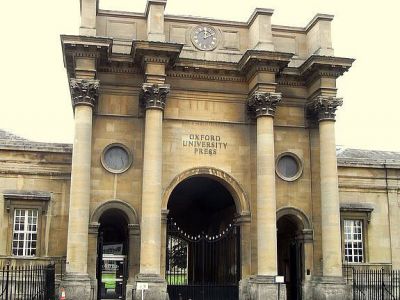 The Oxford University Press building stands on the corner of Great Clarendon Street and Walton Street in the Jericho area of the city. You can visit the OUP Museum by appointment.

The OUP is the biggest university press in the world and has offices all over the globe. The whole story began in 1480 two years after Theodoric Rood brought his wooden printing press from Cologne and set it up in the city. The first book printed was a copy of «Exposito in symbolum apostolorum» by Rufinus.

The University began to get involved in printing Bibles and other theological and educational texts. In 1633 OUP’s legal status was consolidated under the Great Charter that Archbishop William Laud obtained from King Charles I. This Charter permitted the university to print books outside the theological sphere.

In 1713, the Clarendon Building on Broad Street was built especially to house the OUP and it stayed there until 1825. The building you will see today was constructed by Edward Blore and Daniel Robertson.

The OUP was responsible for editing and printing the first Oxford English Dictionary in the 19th century. In 1834 it bought its own paper mill, and spread its wings, setting up offices in America and India.

For over 100 years the OUP has been responsible for printing books in every domain from stories for children to World Classics.
Image by TheCreativePenn on Flickr under Creative Commons License.
Sight description based on wikipedia