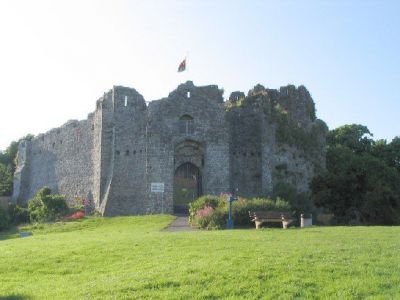 Oystermouth Castle (Castell Ystum Llwynarth) is a Norman stone castle, overlooking Swansea Bay on the east side of the Gower Peninsula near the village of the Mumbles.

The first castle was founded by William de Londres of Ogmore Castle soon after 1106 following the capture of Gower by the Normans.

The de Braose dynasty could afford to rebuild it in stone. A high curtain wall was built, internal buildings added, a chapel, basements,three storey residential buildings with fireplaces and garderobes on each floor.

After the Middle Ages, the castle gradually fell into ruin. It was restored by George Grant Francis in the 1840s while the castle was owned by the then Duke of Beaufort.

Remnants of an ornate medieval painting dating back to the 14th century have recently been found in the chapel.The surviving painting is thought to be over 700 years old. It's thought the painting is both highly important and testimony to the original design of the chapel attributed to Alina de Breos.

Following the first phase of conservation works, Oystermouth Castle reopened to the public in mid July 2011.The scheme includes new visitor facilities, an educational space and a 30-foot high glass viewing platform and bridge that leads to Alina's Chapel. The chapel marks the attraction's highest architectural point and features a tracery window with views over Swansea Bay.