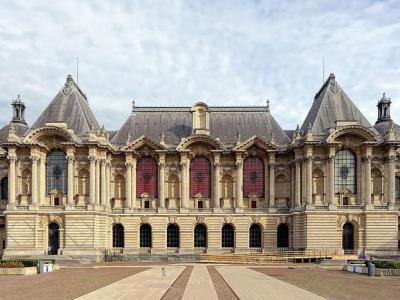 Facing the fountains enclosing the sculpture "Group Of Three" on the Republic Square, is the Palace of Fine Arts. On the other side of the square is the imposing limestone structure, the Prefecture of Lille.

The museum is a grandiose building made in a French end of century style of official architecture. It has elements of the Italian Renaissance with columns, pediments and a French roof. There are two domed pavilions on either side of the monumental façade. The façade is set off with moldings. The wings have loggias and balusters.

The original museum was established by Napoleon in 1801. The Emperor's decree selected 15 French cities to house art seized from churches and occupied lands. The new Museum was opened in 1892 and renovated extensively in 1997. The museum now has 71,500 square feet of exhibition space making it one of the largest museums in France.

The ground floor has military fortification models by Sebastien de Vauban, the famous military engineer of Louis XIV. Sebastien shares this space with 135 French sculptures. On the second floor (French first floor) is a collection of Flemish and Dutch paintings. There are 19th century French paintings from David to Toulouse-Lautrec.