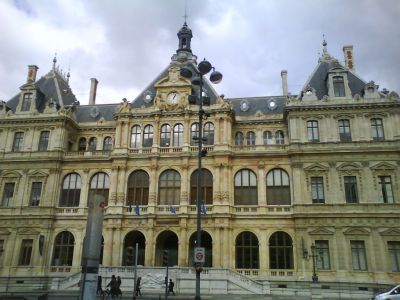 The decision to build the palace was taken by the City Council in 1853. The project was finished in 1860, designed by architect René Dardel, featuring four pavilions around a central glass-roofed main hall, called the “Salle de la Corbeille”, with both the north and south façades richly decorated with ornate coping and columns supporting elegant balconies.

The statues representing Agriculture, Industry, Justice, Temperance and Trade reflect the purpose of the work carried out inside the building. The ceiling paintings done by Lyonnais artists, such as Ponthus-Cinier and Beuchot, continue the themes of the statues.

At the foot of the steps giving onto Place des Cordeliers there are two more, allegorical statues depicting the Rivers Saône and Rhône with their arms entwined. On the north side of the building, the former Place de la Bourse has been turned into a small, rather charming public garden.

In 1894, President of the Third Republic, Sadi Carnot, was assassinated while leaving the building. In memory of the late president, there is a plaque installed on the wall near the main entrance.

Parts of the palace are open to the public for guided tours only.
Image by Jean-Louis Lascoux on Wikimedia under Creative Commons License.