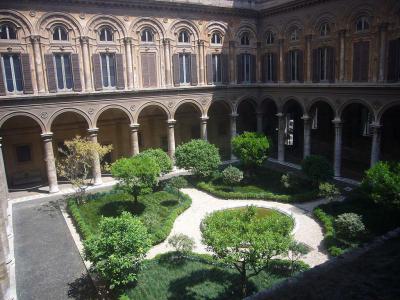 Palazzo Doria Pamphilj is home to one of the largest private art collections in Rome which is quite a feat in a city renowned for its artistic heritage. The palace was built in 1505 by a Catholic cardinal and then, a century later, passed on to another cardinal whose niece, in turn, married Camillo Pamphilj, nephew of Pope Innocent X.

The stately rooms of the palace, with vaulted ceilings and marvelous decoration, hold a vast display of Medieval and Byzantine art. One of the palace's wings is home to the Aldobrandini Gallery, featuring a mishmash of paintings and garden statues. In the adjoining chamber is a portrait of Pope Innocent X himself, painted by Velazquez. The Gallery of Mirrors, modeled after the namesake room in Versailles, is fitted with mirrors imported from France and is truly breathtaking. The ceiling fresco, depicting Labors of Hercules, is intricately intertwined with the Pamphilj family tree alluding to their supposed relation to the legendary Greek hero. The Primitives Room contains paintings performed on wooden panels.

The palazzo doesn't usually get too crowded and is quite comfortable to explore at one's own pace, which makes it all too nice and calming respite compared to other landmark Roman attractions. There's no need to buy a guided tour here either, as there's a free audio guide available, which is quite informative and adds much value to the visit. Each room, as well as some of the exhibits, are numbered specially for the audio guide. Also, for visitors enjoyment, apart from the art collection, there is a delightful cafeteria and a tea room, plus a bookshop.

Why You Should Visit:
While the world-famous Vatican Museums are the most popular in the city, this impressive palace is one of the most interesting/rewarding visits you can make.

Tip:
The so-called 'Photo Pass' is available in the bookshop, for personal (and not commercial) use only.