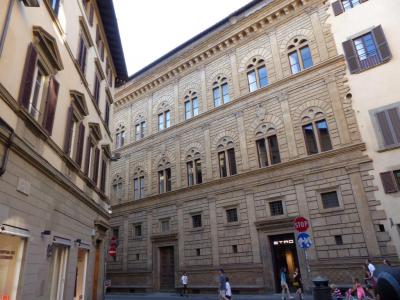 Believed to have been designed by Leon Battista Alberti between 1446 and 1451 and executed, at least in part, by Bernardo Rossellino, the Rucellai Palace. Its facade was one of the first to proclaim the new ideas of Renaissance architecture based on the use of pilasters and entablatures in proportional relationship to each other, and as such is a beautiful pioneering of the three-tier Florentine style.

The grid-like facade, achieved through the application of a scheme of trabeated articulation, makes a statement of rational humanist clarity. The stone veneer is given a channeled rustication and serves as the background for the smooth-faced pilasters and entablatures which divide the facade into a series of three-story bays. The three stories of the Rucellai facade have different classical orders, as in the Colosseum, but with the Tuscan order at the base, a Renaissance original in place of the Ionic order at the second level, and a very simplified Corinthian order at the top level. Twin-lit, round-arched windows in the two upper stories are set within arches with highly pronounced voussoirs that spring from pilaster to pilaster. The facade is topped by a boldly projecting cornice.

The Rucellai, like the Medici, were bankers and the building shows the wealth. Even though there is no way to really imagine the inside of the building, the exterior is there for everyone to admire.

Tip:
The world-known Il Latini restaurant is located on the ground floor of what used to be apart of the palazzo. They are packed nearly every evening so be sure to make a reservation to enjoy their Tuscan cuisine.
Image by Benjamín Núñez González on Wikimedia under Creative Commons License.