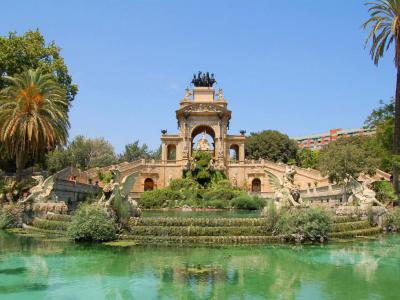 This beautiful park in Ciutat Vella, the no. 1 district of Barcelona, has been in place since the mid 19th century. The name Ciutat Vella translates from Catalan as the "old city". There was a time when this park was the only patch of greenery in Barcelona - boasting both seasonal and annual plants - and, as such, enjoyed much popularity with the locals (and it still does, actually).

The park covers an area of 70 acres and incorporates a lake and a fairly large zoo, accommodating over 7,000 animals. Among them, once, there was a world-famous attraction, “Snowflake” - the albino male gorilla, who used to live here until his death in 2003. Another prominent sight within the park is the humongous Cascada fountain designed, back in the 1880s, by Josep Fontsere assisted by the then student of architecture Antoni Gaudi. Apart from that, the park is also home to the parliament of Catalonia.

Locals and tourists alike, enjoy spending time here, and especially those with kids. The park is well equipped for picnics and public holidays, plus caters for sports, such as jogging, cycling and boating. Boats and bicycles are available for hire here at a small price. The park itself is free to enter and is well worth a visit no matter how long you stay in Barcelona!

Why You Should Visit:
Escape and relax without leaving the city centre!
Image Courtesy of Flickr and Mark_M.