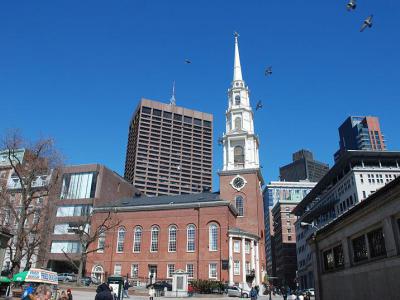 The Park Street Church (built 1810) is an active Conservative Congregational Church in Boston standing at the corner of Tremont Street and Park Street. The church's steeple rises to 217 feet and remains a landmark visible from several Boston neighborhoods. The steeple is seen as the terminus of both Columbus Avenue and Tremont Street, two of Boston's radial avenues.

The temple is adjacent to the historic Granary Burying Ground. The cornerstone of the church was laid on May 1, 1810 and construction was completed by the end of the year, under the guidance of Peter Banner (architect), Benajah Young (chief mason) and Solomon Willard (woodcarver). Banner took inspiration from several early pattern books, and his design is reminiscent of a London church by Christopher Wren. The church became known as "Brimstone Corner", in part because of the missionary character of its preaching, and in part because of the storage of gunpowder during the War of 1812.

Why You Should Visit:
Considering the size of numerous modern skyscrapers and tall buildings across the U.S., it is interesting to think that, back in the early years, this was the tallest building in the country.
Worth walking by to admire the architecture.
Image by Adavyd on Wikimedia under Creative Commons License.
Sight description based on wikipedia