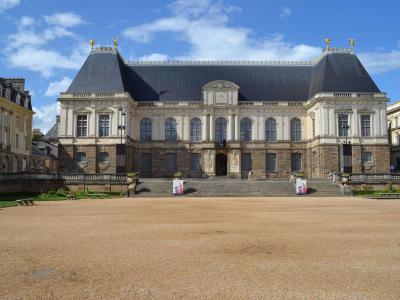 Parlement of Brittany, Rennes (must see)

The Parlement of Brittany was a court of justice, under France’s Ancien Régime, with its seat at Rennes. Plans were drawn by the city architect, German Gaultier and reviewed by Salomon of Brush (designer of the facades). Built in a restrained style, the parliament of Brittany decided to site the palace in the heart of the city of Rennes, where the parliamentary representatives have sat ever since 1655. The building has been recently restored, following severe fire damage on February 5, 1994, a consequence linked to the violent demonstrations of the local fishermen. Adapted to the requirements of the 21st century, the Court of Appeal of Rennes was able to resume the activities of the previous centuries. Other, newer buildings in the city are home to the various forms of justice.
Image by Sémhur on Wikimedia under Creative Commons License.
Sight description based on wikipedia