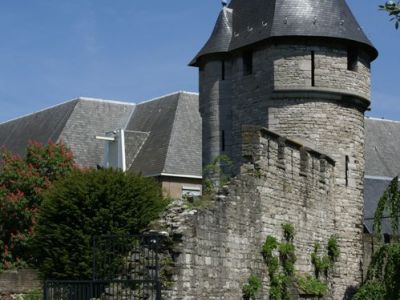 Pater Vinktoren, or Father Vinck Tower, is located next to Helpoort. It is part of the Second City Walls and is the point of connection with the First City Walls. The tower was built to defend the Jeker gateway and its construction was finished between 1370 and 1380. In 1880 Pater Vinktoren was almost completely destroyed, but it was fully restored in 1906 by architect W. Sprenger, It was then named after Father Servatius Vinck, a Franciscan priest who was executed in 1638. The tower has two floors. The first floor gives way to the parapet and the second can be accessed from the staircase built on the city side.
Image by Otter on Wikimedia under Creative Commons License.

Want to visit this sight? Check out these Self-Guided Walking Tours in Maastricht. Alternatively, you can download the mobile app "GPSmyCity: Walks in 1K+ Cities" from iTunes App Store or Google Play. The app turns your mobile device to a personal tour guide and it works offline, so no data plan is needed when traveling abroad.