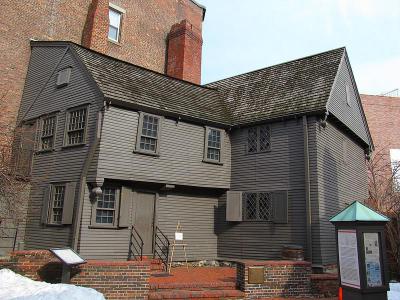 The Paul Revere House (1680) is the colonial home of American patriot Paul Revere during the time of the American Revolution. A prominent Boston industrialist, Revere is best known for his midnight ride to alert the colonial militia in April 1775 to the approach of British forces before the battles of Lexington and Concord. He also helped organize an intelligence and alarm system to keep watch on the British military.

His house is located at 19 North Square, in Boston's North End, and is now operated as a nonprofit museum by the Paul Revere Memorial Association. In April 1908, the house opened its doors to the public as one of the earliest historic house-museums in the United States.

Despite the substantial renovation process which returned the house to its conjectured appearance around 1700, 90 percent of the structure (including two doors, three window frames, and portions of the flooring, foundation, inner wall material and raftering) is original to 1680, though none of the window glass is original. Its heavy beams, large fireplaces, and absence of interior hallways are typical of colonial living arrangements. The two chambers upstairs contain several pieces of furniture believed to have belonged to the Revere family.

Why You Should Visit:
Seemingly in excellent condition and, although with only four rooms to see, providing a good sense of the style and scale of homes back in the 1700s. It's a short house tour but the knowledgeable staff will answer questions you may have regarding Paul Revere and/or his house.

Tip:
Entrance is $5 per person and they only accept cash, so make sure to have some on hand if you're interested in seeing this historic house.