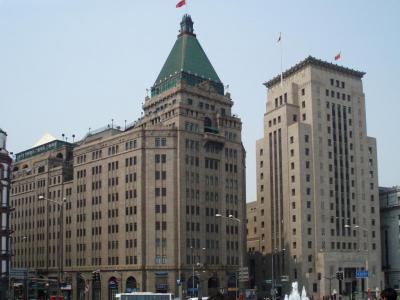 Dominating the east end of Nanjing Road is the most legendary edifice on the Bund – the landmark Fairmont Peace Hotel. Opened in 1929 as the luxurious Cathay Hotel, this building has a striking Art Deco façade and iconic green copper dome, both recently restored to their former glory.

Nicknamed “The Claridges of the Far East”, this was the place to be seen at in pre-war Shanghai with the likes of Douglas Fairbanks, Charlie Chaplin, and George Bernard Shaw among the celebrity guests, and where Noel Coward said to have penned “Private Lives” in just four days, while sick with a flu. Owned by property tycoon Sir Victor Sassoon, whose business empire was built on opium trade, this place also hosted many dignitaries and foreign envoys, boasting innovations, such as room telephones, ahead of any European hotel. With six floors and 120 guest rooms, it was the first hotel in Shanghai to have two elevators. Among other luxuries here were private plumbing system, marble baths with silver taps, as well as enamel-coated lavatories imported from Britain.

Today, apart from high-end guests, the hotel attracts just as many history and architecture buffs with its Art Deco lobby, on-site Peace Museum, and the Old Shanghai reading room filled with eclectic memorabilia including Qing-period porcelain and bronze, black and white photos of the days gone by, silver settings, as well as books.

The ground floor cafe offers great people-watching opportunities with seats by the windows, while the rooftop bar on the 9th floor is good for evening drinks with a nice view of the Bund and Pudong ablaze with night illumination. Also, if you're in the mood for some slow-paced classical jazz with a chance to swirl or sip a cocktail to the nostalgic tunes played by a group of lively 80-year-olds, then head for to the hotel's Jazz Bar, reminiscent of those bars in the 1920s and 30s, featuring the Old Jazz Band. Quality time guaranteed!

Tip:
Those who want to take a guided tour can book it either at the hotel's museum or online. Some tours are offered in English and come at a charge.
Image by Georgio on Wikimedia under Creative Commons License.
Sight description based on wikipedia