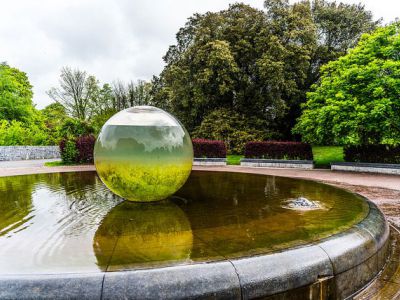 The People's Park is the largest public park in Waterford city, Ireland. Laid out over a century ago, its 6.6 hectares (16.3 acres) comprise the foremost public green space in the city. It is located at the junction of the Park Road and William Street. The current site of the People's Park was originally a marshland which John's River ran through, however in 1857 the river was diverted and the marshland drained to make way for the construction of the park.
The park contains a Victorian-era bandstand, the Goff cycle track, a children's playground, a spherical monument and water feature and an old painted iron bridge connecting the park to the grounds of the Court House. The park has been renovated and upgraded in recent years. The old caretaker's house has been carefully renovated and a small extension has been added with a cafe called the Park Lodge now occupying the structure. A baby playground area has also been built. On 12 July 2006, €1 million funding was announced to continue refurbishment. Perhaps the most important element of the aforementioned refurbishment is the inclusion of a skateboarding park.
Image Courtesy of Flickr and William Murphy.
Sight description based on Wikipedia.

Want to visit this sight? Check out these Self-Guided Walking Tours in Waterford. Alternatively, you can download the mobile app "GPSmyCity: Walks in 1K+ Cities" from iTunes App Store or Google Play. The app turns your mobile device to a personal tour guide and it works offline, so no data plan is needed when traveling abroad.

Waterford is one of the oldest cities in Ireland, located in the southeastern part of the country. Although fairly small, Waterford has a lot to offer in terms of historic attractions, some dating back hundreds of years. This orientation walk will take you to the most prominent sights of the city.

Waterford is one of the largest cities in southeastern Ireland. The city's motto is “Waterford remains the untaken city." Visit castles built in ancient times, churches that played witness to religious revolutions and other historically significant buildings. Take this walking tour to visit the most notable historic buildings in Waterford.