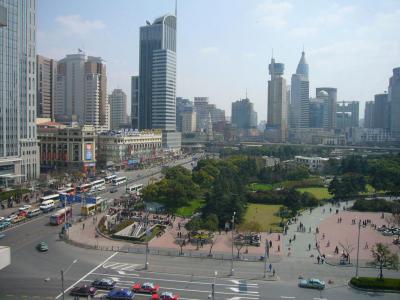 People’s Square lies at the very heart of Shanghai and is the city's exact center and showcase spot, home to the world-class museums, Grand Theater, five-star hotels, and a large water fountain, not to mention the imposing Shanghai City Hall. All these buildings were raised in the late 1990s, each being a significant architectural statement of Shanghai's economic and cultural progress.

Few places in China can boast such a congregation of great sights and equally beautiful skyline, all of which makes it a tremendously popular meeting point and location for numerous celebrations. Nowadays, there is little in People’s Square's appearance to remind of its past as the finest racecourse in Asia, where millionaires used to see their steeds run for glory. The wartime Japanese administration used that racetrack as a holding camp, while the post-war Chinese nationalist government turned it into a sports arena.

By 1952, the new Communist regime had banned racing and gambling altogether and proceeded to convert part of the racetrack into a recreational area, now known as the People’s Park. Both, the square and the park are impeccably tidy and have plenty of benches to sit on. The park is nicely landscaped, with plenty of tree-lined paths and ponds much liked by the locals who often come here for a walk or to exercise or to fly kites, while the kids engage in various fun activities at a playground.

Tip:
Underneath the park there's a fantastic underground labyrinth of galleries with colorful stores, subway station, and a food court. A definite must-visit!
Image by Jordiferrer on Wikimedia under Creative Commons License.
Sight description based on wikipedia