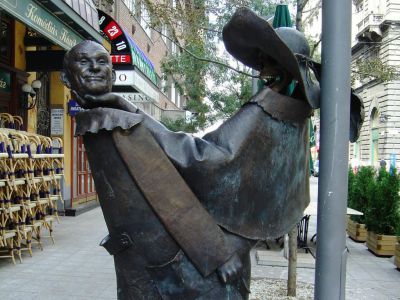 Often described as “Champs-Élysées and Broadway rolled into one”, the intersection of Nagymező Street and Andrassy Avenue in Budapest, commonly known as Pest Broadway, is historically renowned for its association with theaters and music. Situated close to the Budapest Opera House, the area is home to the Moulin Rouge nightclub, the Mai Manó House of Photography, the Ernst Gallery, and many other artistically influenced companies the presence of which makes it a cultural center of the city.

Among them are some traditional theaters, like the Thália and Radnóti and the Operetta Theatre, found at the nearby Nagymező Street. A place called Mikroszkóp is famous for its stand-up comedy, attesting to which is a statue of Hungary's most celebrated stand-up comedian, Géza Hofi, placed out front. The surrounding streets, leading toward the Ferenc Liszt Academy of Music, are quite big on the night entertainment. If you care to stroll down a bit in that direction, you will spot many cute sculptures and monuments along the way, as well.

There is a rich choice of fine dining on Pest Broadway too, including gourmet restaurants, quaint cafes and bars dotting the streets and largely contributing to the area's overall popularity with the locals and tourists alike.
Image by Magellan on Wikimedia under Creative Commons License.