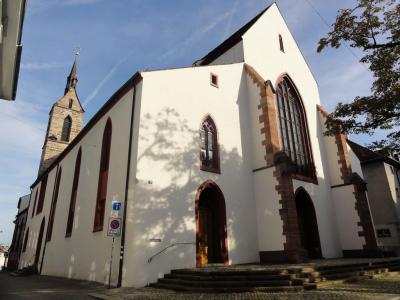 Basel's Peterskirche has been a Protestant (Evangelical Reformed) church since 1529, and consecrated to Saints Peter and Paul. In fact, St. Peter's is one of the four oldest parishes in the Grossbasel neighborhood.

The first temple on this site was built around the 9th century, during the Carolingian times, founded probably as a cemetery church. In 1035 it became a parish church, and by 1230-1233 had been expanded and made into a monastery. The tower on the north side of the choir was built from 1270. The Basel earthquake of 1356 caused severe damage to the building and prompted its reconstruction.

At that point the choir was redesigned too – vaulted in 1477-1481 and added with a roof turret in 1501-1502. The twelve keystones in the building symbolize twelve apostles in half-length. The large east window was also built around that time.

There is a three-part stone celebrant's seat on the south wall. Doors lead to the tower and adjoining rooms. Next to the choir, in the extension of the north aisle, is the Marien or Eberlerkapelle, opposite which in the south aisle is Martins or Kappenbach chapel.

The numerous wall paintings inside, dating from the 14th-16th centuries, were whitewashed after the Reformation; the most significant of them are now exposed again. The elaborately carved choir stalls were created in 1494–1498 by the table maker Ulrich Bruder from Constance together with assistants from Basel.

The mechanical organ, by Neidhart & Lhôte, was added in 1968.
Image Courtesy of Wikimedia and Mattes.
Sight description based on Wikipedia.