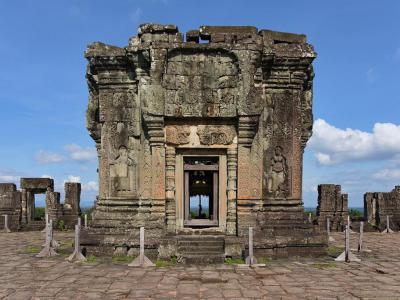 Phnom Bakheng at Angkor is a Hindu temple in the form of a temple mountain. Dedicated to Shiva, it was built at the end of the 9th century, during the reign of King Yasovarman (889-910). Located atop a hill, it is nowadays a popular tourist spot for sunset views of the much bigger temple Angkor Wat, which lies amid the jungle about 1.5 km to the southeast. The large number of visitors makes Phnom Bakheng one of the most threatened monuments of Angkor.

Constructed more than two centuries before Angkor Wat, Phnom Bakheng was in its day the principal temple of the Angkor region, historians believe. It was the architectural centerpiece of a new capital, Yasodharapura, that Yasovarman built when he moved the court from the capital Hariharalaya in the Roluos area located to the southeast.

Phnom Bakheng is a symbolic representation of Mount Meru, home of the Hindu gods, a status emphasized by the temple’s location atop a steep hill. The temple faces east, measures 76 meters square at its base and is built in a pyramid form of six tiers. At the top level, five sandstone sanctuaries, in various states of repair, stand in a quincunx pattern—one in the center and one at each corner of the level’s square. Originally, 108 small towers were arrayed around the temple at ground level and on various of its tiers; most of them have collapsed.

This sight is featured in a self-guided walking tour of Siem Reap, Cambodia within the mobile app "GPSmyCity: Walks in 1K+ Cities" which can be downloaded from iTunes App Store or Google Play. Please download the app to your mobile phone or tablet for travel directions for visiting this sight. The app turns your mobile device to a personal tour guide and it works offline, so no data plan is needed when traveling abroad.