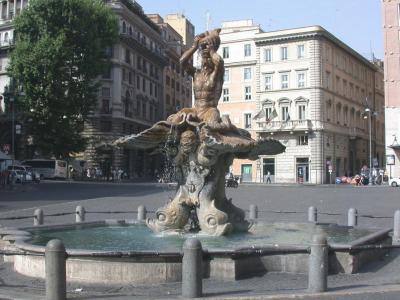 Piazza Barberini gets its name from one of Rome's most powerful Renaissance-era families who, since 1625, took over the square and made it an addition to their residential palace (now housing the National Gallery of Ancient Art). One of the Barberini sons eventually became Pope Urban VIII, famous for his persecution of Galileo Galilei, who invented the telescope and “heretically” claimed the Earth revolves around the Sun.

Nevertheless, the Pope had plans to build several fountains in Rome, and in 1642 Gian Lorenzo Bernini was given patronage over the one standing in this square, now counted among his masterpieces. In building the fountain, Bernini closely followed the instructions of the Pope, who was inspired by a passage in Book I of “Metamorphose” by the famous Roman poet, Ovid. The passage Bernini was asked to put into sculpture describes Triton commanding the waters to retreat after the Deluge, at the same time calling back the world to order and peace.

The fountain was sculpted in travertine – a type of limestone formed by hot springs – and depicts the magnificent Triton as a merman as he kneels on the tails of four dolphins. In his hand is a conch shell that he is raising to his lips like a trumpet.

The four dolphins that form the base in the center of the basin are entwined around the Papal Tiara and crossed keys, below which you can see the Barberini heraldic symbol of bees.

The fountain is unique in that it was the first free-standing thematic fountain to be sculpted outside private gardens. At that time, public fountains were rather plain, unassuming affairs, but Pope Urban VIII wanted something a bit more spectacular outside his family home. The Triton Fountain immediately gave a strong scenic sense to the whole square, becoming a beacon for people coming from the city center.
Image by MM assumed on Wikimedia under Creative Commons License.
Sight description based on wikipedia