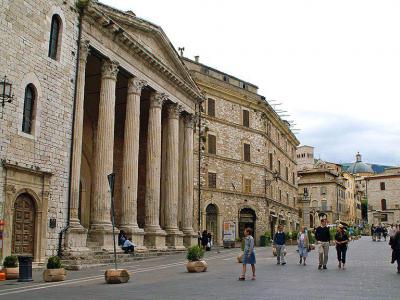 Here is the secular heart of the city where social and cultural life of the town took place. The Town Hall Square is a true Umbrian city square. It is situated where the Roman Forum once stood. It is a rectangular square, connecting to the Corso Mazzini and under the looming Rocca Maggiore.

It was the focal point of medieval Assisi. It has always been a popular venue for gatherings and open markets. Feudal aristocracy erected their residential towers here. Towers that were later replaced with the buildings of the emerging merchant middle-class.

In 1212 the city consuls gained from the Benedictan monks authorization to set up the temple of Minerva as the municipal center of the town. The square was enlarged and by 1305 the Roman temple was flanked by the People's Tower and the Captain of the People Palace. On the south and western sides of the square was the Town Hall.

Besides the monuments and buildings noted there is also the Zubboli Bookshop, since 1870, and the Bar Minerva, a popular watering hole.

Each year the people of Assisi observe the Calendimaggio, a public festival held in May. There are parades in medieval costumes and re-enactments of the ancient feud between the Fiumi and Nepis families.
Image by Mika Auramo on Wikimedia under Creative Commons License.

Rolled up on the hill, with the plain below and Mount Subasio climbing above, the mere view of Assisi in the rosy light of the sunset is enough to send the souls of pilgrims to heaven. It is at this mystical hour, when the noise of visitors’ steps fades and the town is enveloped in a religious silence, that the true spirit of Saint Francis of Assisi can be felt more intimately. Let us set off...  view more