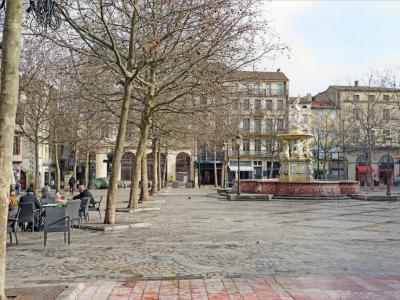 In 1355 royal surveyors laid out a large square in Carcassonne, France. The square can be found today at the junction of rue de Verdun and rue Georges Clemenceau.

Throughout its existence, the square has had a variety of names. It has been called Louis XVI Square, Louis XVIII Square, Freedom Square, Republic Square, Napoleon Square and Perrache Square. Finally, in 1889, it is Carnot Square.

Lazare Carnot was a hero of the French revolution. He was a mathematician, military engineer and a politician closely associated with both Robespierre and Napoleon Bonaparte. In the assembly he was not radical. He sat between the extremist Jacobins and the more conservative Girondins. He seemed neither Meat nor Dairy.

The square is paved with stones. At the center of the square is The Fountain of Neptune. It is a sculpture of the god standing on a plate supported by nymphs standing on a pedestal sitting in a round pond. Dolphins spray water into the pond. The sculpture is by Italian artists Barata and son.

Every Tuesday, Thursday and Saturday there is an open air market in the square. There are outdoor cafe tables where one can sit and enjoy a coffee and pastis while watching people, children and pigeons. As the time passes, imagine the square as a place of executions, fighting and fairs. It has been all these things.
Image Courtesy of Flickr and Jean-Pierre Dalbéra.