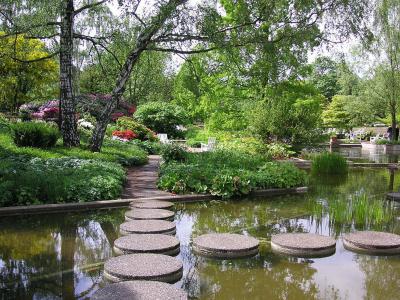 Planten un Blomen is a 47 hectare public park which lies north west of Hamburg city centre, immediately next to the home of the Hamburger Dom seasonal fun fair. The park’s name is Low German for ‘plants and flowers’. Low German is a variation of the German language, widely spoken in the Netherlands and Northern Germany. The park is renowned for its water light concerts, musical performances and ornamental gardens, and is free to visit.

The park began with a single plant – a Platinus, installed in November 1821 and still present, next to the Dammtor rail station entrance. An underused open space for many years, the area became a park officially in 1930. Five years later it hosted a horticultural exhibition named Planten un Blomen, and has kept this name ever since. The park’s natural highlights include listed tropical hothouses, a 5000 square metre rose garden, and a Japanese garden complete with tea house – the largest of its kind in Europe - which opened in 1985.

The park boasts a large children’s playground at its southern end, and assembles a huge outdoor ice rink each winter. The Museum of Hamburg History is also located within the boundaries of the park, and is found on its southwestern edge.
Image by Wolfgang Feld on Wikimedia under Creative Commons License.