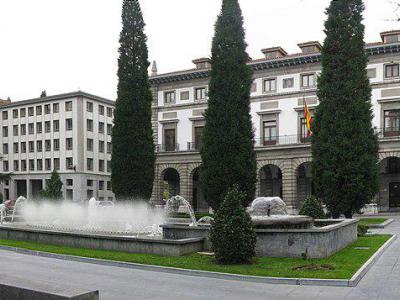 Plaza de España houses a beautiful composition of three statues, called Monumento a Francisco Franco, Spanish general, the leader of the Nationalist military rebellion during the Spanish Civil War. The monument consists of two lateral sculptures and a central one. The lateral figures represent Neptune sitting of the dolphin's back and Apollo looking at the sun. The central figure depicts the Greek Goddess, Hera, proudly facing her future. The curious thing about this composition is its actual dedication. Spain, during its long history, has gone through very difficult years of fascist regime. And Francisco Franco used to be one of the fascist leaders. In 2007, the Spanish government passed the Historical Memory Law, officially condemning the fascist regime. This law implied honoring victims from both sides, but removing all the Francoist symbols and statues from public areas. That's why it is very surprising to see the portrait and the name of Francisco Franco on the column Hera Goddess is standing on.
Image Courtesy of Flickr and Nacho.