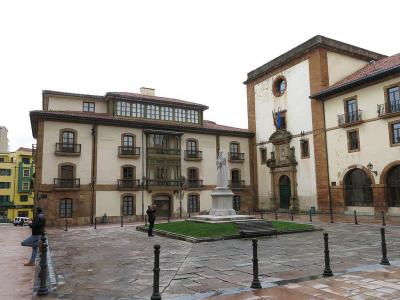 Plaza de Feijóo is located in the heart of the historic city of Oviedo. It is named after the renown writer, teacher and philosopher, Benito Jerónimo Feijoo. The statue of Father Fray Benito Feijoo is installed in the center of the square. Benito Feijoo is famous for writing several immortal works like “Teatro Crítico” (Critic Theater) and “Cartas Eruditas” (Educational Letters). His works were translated in Italian, Portuguese, English, and German. The writer was one of the first to support women rights in his famous “Defense of Women” (1726), claiming that women have the same intelligence level as men and should be given equal rights and opportunities. His works still possess high cultural and scientific value.
Image Courtesy of Wikimedia and Enric.