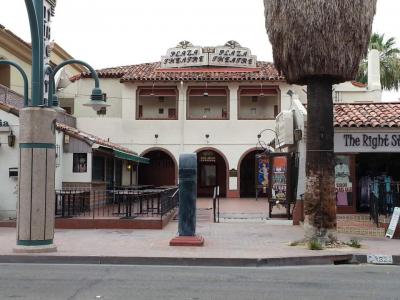 The Plaza Theater was founded in 1936 by local businessman Earle C. Strebe. Like the rest of downtown and La Plaza, the theater was built in the Spanish Colonial style. As with many theaters from this era, the Plaza Theater hosted motion pictures and many live shows and performances. Many feature films held their world premieres here. The theater's opening show, "Camille," hosted stars Robert Taylor and Greta Garbo.

It was also an 800-seat playhouse. A famous annual show, the "Village Insanities," later renamed the "Village Vanities." Nationally-broadcast radio programs were hosted from the venue, and it provided a venue for all sorts of local events.

The theater went into a dormancy period in 1989, but the Fabulous Palm Springs Follies were founded. The critically-acclaimed show ran from 1990 to 2014.

The theater has sat unused since then. Recently, a local movement has begun plans to reopen the shuttered landmark. A groundswell of support for the old theater means that hopefully, it will come to life again soon. There are plans to completely renovate and revitalize the venue, with all new seating and infrastructure repairs.
Image by Toohool under Creative Commons License.