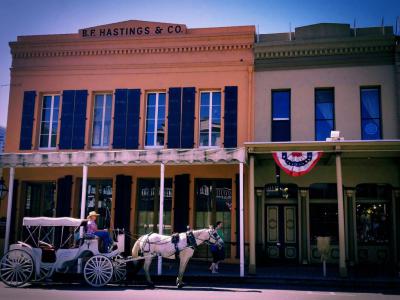 The Pony Express Terminal, also known as the B. F. Hastings Bank Building, is a historic commercial building at 1000 2nd Street in Sacramento, California. Built in 1852, it was the western endpoint of the Pony Express from 1860 to 1861, the period of the service's operation. It was declared a National Historic Landmark in 1966.

It is a two-story brick structure, presenting four bays to J Street and nine to 2nd Street. A single-story canopy extends across the sidewalk in front of both facades, supported by simple square posts. A metal staircase rises in the middle of the 2nd Street facade to an entrance on the second floor.