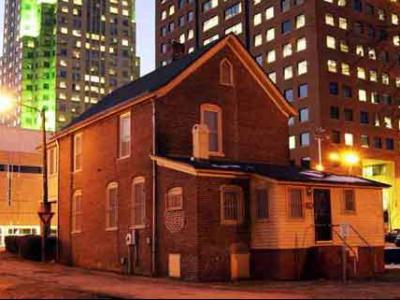 The Pope House Museum, built in 1901, is a restored home once owned by Dr. M.T. Pope, a prominent African-American citizen of Raleigh. Pope installed the latest technology in his home, including combination gas and electric fixtures, a kitchen with running water, a full bathroom on the second floor, coal burning heating stoves, and a telephone. He also installed a call bell system, with buttons in each room and an annunciator in the back hall. Pope began to see patients in the house during the 1920s and 1930s, when his health began to fail. The small area at the rear of the back hall, adjacent to the kitchen, was configured to include a small hand sink and built-in cabinet for instruments.

Although the Pope House remains in the neighborhood, the area around it has dramatically changed. Older homes and businesses were replaced with office buildings, parking lots and newer homes. The most evident change was the construction of the Raleigh Convention Center directly across the street from the house. Today, the house is in the shadows of skyscrapers that were built in the 1980s and 1990s.

The Pope House was officially listed on the National Register of Historic Places on November 22, 1999. The following month the trustees of the Pope Charitable Foundation decided to begin the process of turning the house into a museum. One month later, The Pope House Museum Foundation was incorporated as a non-profit organization. The extensive family papers were sorted and catalogued, and donated to the Southern Historical Collection at the University of North Carolina at Chapel Hill.