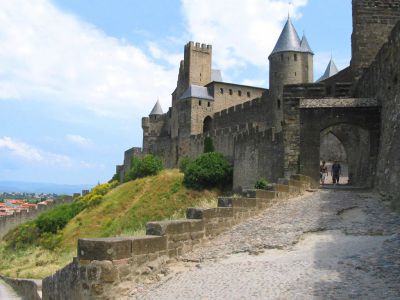 Partially destroyed in 1816 to make room for the Saint Gimer church, the ramp and crenelated walls of this gate remain overlooking the river Aude. The gate has been used as a locale for several "period" films, including The Visitors, Robin Hood, Prince of Thieves and Le Corniaud.

The Aude Gate, once called the Gate of Toulouse, pierced the Visigothic wall in the 12th century. The semicircular arch on the outside looks to be from this era, particularly with reference to its appearance and material used in construction.

The ramp is dominated by two towers. The intruder was forced to turn sharply to reach the Gate. In front of the gate there was no bridge or ditch to protect attackers. The space was untenable for an enemy. It was basically an armed trap, controlled on all sides from above.

Aude Gate is more impressive as an entrance to the Cite than other gates. It is at the peak of a steep path not open to traffic. It requires a rather steep climb but it is more tranquil than the usual tourist entry points.
Image Courtesy of Wikimedia and Jean-Pol GRANDMONT.