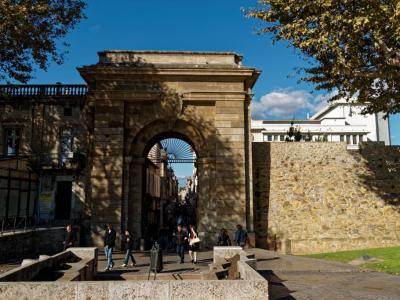 What about the badges and shields and other adornments that were removed in 1779? What are we missing and why? In 1778 four projects for the gates of the city were submitted to the mayor. Mayor Dupre favored the plans submitted by M. Dalbeau, an architect and City Inspector. In 1779, for 400 pounds, Sieur Parant, sculptor, set to work.

The work was destruction, unusual for the sculptor but for the money, ok. The outer escutcheon of the King's arms was ten feet high and nine feet wide. It bore the cordons of Saint-Louis and Saint-Michel the frame was fashioned with laurel branches. The inner escutcheon was smaller with the arms of the city and more laurels. All gone now.

Why? It might be thought that signs of royalty were anathema in the Revolution but the Revolution and its effects were yet to come. It is more likely Mr. Dalbeau and the Mayor were simply caught up in the fever of re-doing the old and bringing in the new.

The gate opens up to the old medieval city. One leaves a pleasant square with fountains and cafes and enters the narrow cobblestone byways of the middle ages. A dream-like experience.
Image Courtesy of Wikimedia and Txllxt TxllxT.