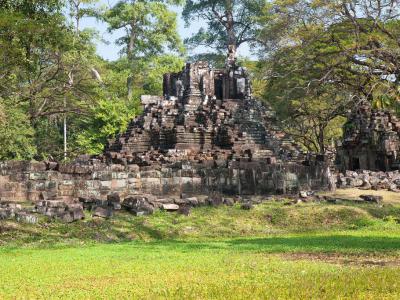 Preah Pithu or Prah Pithu, is a group of five temples at Angkor, Cambodia. They're located in Angkor Thom, north-east of the Bayon, in front of Tep Pranam. The temples are near but they weren't built in the same period, except for two of them, so there is no apparent order. They're identified by letters: T, U, V, W and X. "X" is a buddhist temple, it remained unfinished and is probably the latest. The others are Hindu. The five temples are in bad conditions, upper levels are ruined, but their carvings are interesting and the site is rather peaceful, wooded and scarcely crowded. A moat, often dry, surrounds some of the temples. They were cleaned first by Jean Commaille in 1908, then by Henri Marchal from 1918 to 1920.
Image by Riccardo.fabris on Wikimedia under Creative Commons License.
Sight description based on wikipedia