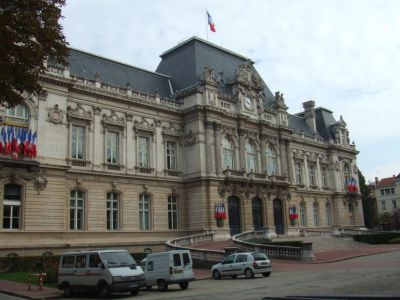 Almost the entire building of the Préfecture du Rhône is open to the public on Heritage Day, but at any time of the year you can visit only parts of it.

It was built in 1890 by Antonin Louvier who decided on an eclectic style – a mixture of elements from former styles – to create something original, so the columns recall ancient Rome, while the roof follows the style used by the architect Mansart.

The sculptures on the façade are by Martin and Pagny; on each side of the clock is a statue, one depicting Day – a woman pulling a veil over her face with an owl at her feet; the other represents Night – a man uncovering his face with a crowing rooster at his side. The medallions are by Aubert; they represent a locomotive, a weaving loom, a ship and a palette, paintbrush and compass.

In the gardens you will see four monuments, erected to Duphot, Victor de Laprade, Felix Mangini and Pierre Dufour.

The atrium has a vaulted ceiling supported by marble columns. The statues of the Roman Emperor Claudius and his brother Germanicus are by Printemps. You can admire two magnificent vases of Sevres porcelain: one in celadon, the other in turquoise. At the foot of the main staircase are statues of Coustou and Meissonier, sculpted by Enderlin.
Image by Kilom691 on Wikimedia under Creative Commons License.