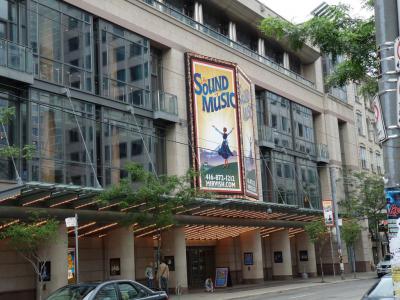 The Princess of Wales Theatre is a 2,000-seat live theatre in Toronto whose name has a triple meaning: it honours Diana, Princess of Wales, with whose consent the theatre was named; it links the building to its sister theatre, the Royal Alexandra, one block to the east, also named – with Royal assent – for a former Princess of Wales; and it recalls the Princess Theatre, Toronto's first "first-class legitimate" playhouse, that stood three blocks to the east until 1931.

For the Princess of Wales Theatre, David Mirvish commissioned a series of murals by American abstract expressionist painter and sculptor Frank Stella. The paintings—10,000 square feet (1,000 m2)—cover the auditorium ceiling dome, the proscenium arch, the walls of lounges and lobbies on all four levels of the theatre and the outside back wall of the fly tower. They are believed to comprise one of the largest mural installations of modern times. Stella also designed the decorative fronts of the boxes and balconies and the decorative end-caps of the each seating row.

The theatre has seating on three levels—orchestra, dress circle and balcony—with elevator access to all levels and is configured as a traditional 19th century English proscenium theatre. Further, the entire building is barrier-free, enabling wheelchair access to all levels — not a common occurrence in Toronto, considering the age of many of its theatres. The Princess of Wales Theatre is designed to incorporate both traditional and contemporary design elements. The Toronto Star described it as "...a glittering glass jewelry case, a sparkling glimpse into a spectacle of total design." It is often used for study by architecture, engineering, design, and theatre students.

On September 29, 2012, after operating for only 19 years, Mirvish Productions announced a plan to demolish the Princess of Wales Theatre in favour of a multi-purpose complex designed by Frank Gehry and which would include an extensive artwork collection available for public viewing, as well as museums, condominium units, and retail spaces. However, in response to criticism from city planners, Mirvish and Gehry announced a revised plan in May 2014 which would spare the structure.
Image by Sam Chan on Wikimedia under Creative Commons License.
Sight description based on wikipedia