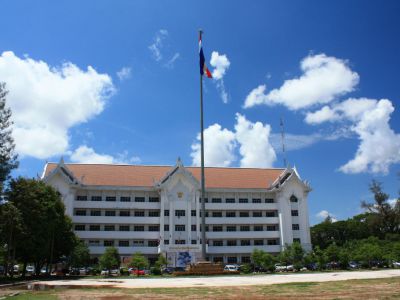 For purposes of administration, Thailand is divided into 76 provinces, each ruled by a Governor and appointed by the democratically elected central government. The Governor is responsible for maintaining law and order in the province and his office is called the Provincial Hall or the Sala Klang Changwat in Thai. Most Provincial Halls in Thailand are multi-storied and white colored buildings designed in true Thai styles. A government office, the premises hoist the Thai national flag and house the statue of King Chulalongkorn, who envisioned the division of Thailand into provinces for efficient administration. The Provincial Hall of Phuket is no exception.

Located away from the busy tourist areas of the west coast, the Provincial Hall sits in the quiet neighborhood of the south-east coast of the island of Phuket. An old construction, the intricate architecture of the building gives an impression that it is made of wood. However, closer inspection reveals that the elaborate work on the front façade is actually concrete. In fact, the Hall was one of the first buildings in Thailand to be built in reinforced concrete. It was known to have 99 doors and no windows. With the advent of air-conditioning, windows were installed and wooden doors were replaced with glass ones. The building houses a picture gallery depicting the history of Phuket which can be visited during working hours of the weekday.
Image Courtesy of Wikimedia and Hdamm.