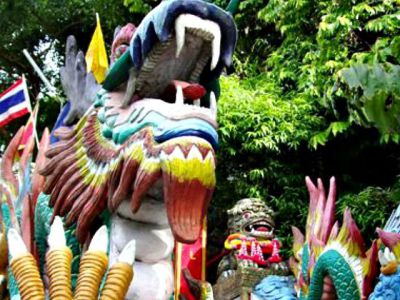 If you think Phuket is only about its beaches, you are in for a pleasant surprise. Contrary to common tourist belief, Phuket also mesmerizes its visitors with its myriad of cultural, traditional and historical landmarks. Scattered all across the city are monuments worthy of visit and one such destination is the Pun Tuao Kong Shrine.

Unlike other Temples, the Pun Tuao Kong Shrine is not extravagant but rather modestly set on the hill of Patong. But don’t let the size and its modest built fool you, the Pun Tuao Shrine has quite a following in Phuket. On the way to the Shrine one can even hear the horns of the car as they pass by. This may get a little noisy at times but this is practiced, to pay respect to the souls that passed away on the hill on the way to the Temple and also to pay respect to the Chief patron of the Shrine.

Built in 1980, the Shrine was built by Chinese settlers, who came to Phuket in search of work, money and prosperity. The Chinese laborers came to the country as a better economical option for the fast growing industry of tin mining. The immigrants soon settled in and built beautiful shrines in honor of their gods and goddesses and the Pun Tuao Kong Shrine is one of the many that were built.
Image Courtesy of Jamie Monk.