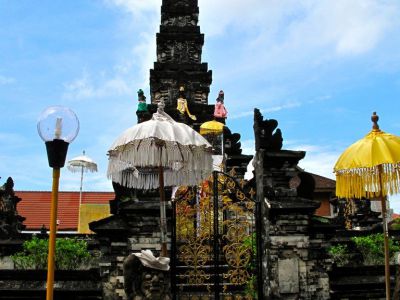 Pura Jagatnatha, also known as the Temple of the God of the Universe, is one of the grandest and most popular temples in Denpasar. The structure was raised in 1970 in honor of Sang Hyang Widhi Wasa, the superior god in the Indonesian Hindu religion. The temple represents a seven tiered throne belonging to the god. The construction is entirely of limestone, except the throne, which is manufactured from authentic white coral. The temple is surrounded by a lotus pond, four splendid bridges and numerous statues representing Hindu religious figures. Currently, Pura Jagatnatha is used as a museum.
Image by sbamueller on Flickr under Creative Commons License.

This sight is featured in a self-guided walking tour of Denpasar, Indonesia within the mobile app "GPSmyCity: Walks in 1K+ Cities" which can be downloaded from iTunes App Store or Google Play. Please download the app to your mobile phone or tablet for travel directions for visiting this sight. The app turns your mobile device to a personal tour guide and it works offline, so no data plan is needed when traveling abroad.

Create Your Own Walk in Denpasar

Creating your own self-guided walk in Denpasar is easy and fun. Choose the city attractions that you want to see and a walk route map will be created just for you. You can even set your hotel as the start point of the walk.

Denpasar is a city that offers visitors many exotic and unusual shopping spots. The city's many shops and markets offer traditional goods that reflect the city's culture and traditions. Every proposed attraction in this guide will provide its visitors an abundance of colours and an unforgettable experience. Take this guided tour to experience the best shopping experience of your life and...  view more

Bali, and Denpasar in particular, is an endless source of culture, history and beauty. All of the following attractions will help you learn about the region's traditions, and let you admire the creations of the local talents and enjoy the natural beauty of Denpasar's flora. The unique and exotic architecture, temples and monuments will relate significant facts about the city's past....  view more