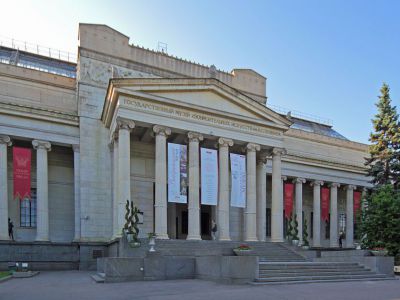 The Pushkin State Museum, named in honor of the great poet Alexander Pushkin, the father of Russian literature, contains an extensive collection of fine arts from around the world. Located in the heart of Moscow, near the Kremlin, it is one of the largest and most prolific museums in Russia. Only the Hermitage in Saint Petersburg is larger.

Originally named the Museum of Fine Arts, the museum opened in 1912. In 1937, it was renamed the Pushkin State Museum of Fine Arts. Although the museum originally housed copies of international and well-known masterpieces, its collection grew to over 560,000 authentic works of art through donations from closed museums and art galleries, nationalized estates, and confiscated private collections.

An impressive collection of Egyptian mummies, Greek and Roman gods, and works from Van Gogh, Botticelli, Gauguin, Rembrandt, Picasso, Canaletto, Guardi, Dufrénoy, Tiepolo, Matisse, and others regally fill the rooms of the museum. There are also many private collections that show promise of being accessible to the public in the near future. The musical festival December Nights has been held at the museum since 1981.

Why You Should Visit:
Along with permanent collection, there are always several important temporary exhibitions (tickets for the latter are quite limited so check online).
The entrance price to the museum and all exhibitions is very affordable, however.
Small cafe in the basement with a blackboard menu in Russian and English.

Tip:
You can buy one- or two-day tickets up to 30 days in advance (remember to print your voucher), or you could try buying tickets at the less crowded Museum of Contemporary Art next door.
Access to permanent collections does not require the wait – just go around the queue and buy a cheap ticket.
Also, try renting one of the audio guides, because the descriptions for each painting are all in Russian.