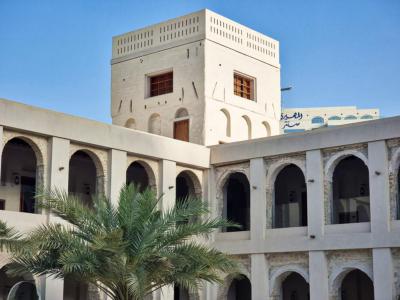 Also referred to as the White Palace or the Al Hosn Palace, Qasr-al-Hosn is the oldest stone building in Abu Dhabi and is an iconic site and landmark attraction in the city. In association with the Cultural Foundation, this palace hosts a number of exhibitions, cultural events and art classes and workshops. It will take you right back to the 18th century when the Al Nahyan family ruled from here.

The name of 'white fort' is partly erroneously, for it was never white until the 1976–1983 renovations when it acquired a bright white painted concrete render. Having started out as a round watchtower defending the only freshwater well on Abu Dhabi island in ca. 1761, this tower was later expanded to a small fort in ca. 1793, at which point it became the permanent residence of the ruling sheikh. A major extension to its current shape took place in the late 1930s, aided by revenues received for granting the first oil license in Abu Dhabi. It remained the royal palace (hence the name Qasr al-Hosn, meaning palace-fort) and seat of government until 1966.
The fort was further expanded in compliance with new requirements during the reign of Sheikh Shakhboot bin Sultan Al Nahyan. For a while, Qasr Al Hosn was a home to the Center for Documentation and Research and the police. A wide scale expansion plan was launched in 2007 by the Abu Dhabi Authority for Culture and Heritage to preserve this historical monument and open it up to the public.

Qasr Al Hosn is situated across from the Etisalat Tower between Sheikh Zayed the First Street, Sheikh Rashid bin Saeed Al Maktoum Street and Al Nasr Street, close to the Cultural Foundation. Do not miss a chance to visit this ancient palace on your stay in Abu Dhabi.
Image by János Korom Dr. on Flickr under Creative Commons License.
Sight description based on wikipedia

Want to visit this sight? Check out these Self-Guided Walking Tours in Abu Dhabi. Alternatively, you can download the mobile app "GPSmyCity: Walks in 1K+ Cities" from iTunes App Store or Google Play. The app turns your mobile device to a personal tour guide and it works offline, so no data plan is needed when traveling abroad.

Create Your Own Walk in Abu Dhabi

Creating your own self-guided walk in Abu Dhabi is easy and fun. Choose the city attractions that you want to see and a walk route map will be created just for you. You can even set your hotel as the start point of the walk.

Corniche Road, or simply The Corniche, is a popular place in Abu Dhabi wrapping around the western side of the city's main island. Today it abounds in cycling paths, fountains and well manicured parks, yet it wasn't until the early 2000s that the Corniche was extended at the expense of the land reclaimed from the sea. Some of its earlier landmarks had to go during the process, while...  view more

Abu Dhabi is home to a number of well-maintained parks and gardens, equally great for recreation, fun, and amusement. The city is also home to the most expensive hotel ever built, which clearly reflects the magnificence and luxury of the UAE capital.

Al Markaziyah is the downtown district of Abu Dhabi, also known as the Central Business District, which is dominated by ultramodern buildings – tall towers and skyscrapers – sided by fine parks and beautiful fountains. Aside from these, a visitor to Abu Dhabi will find many other attractions of historical, archaeological and architectural value. To find out which exactly and to understand the...  view more