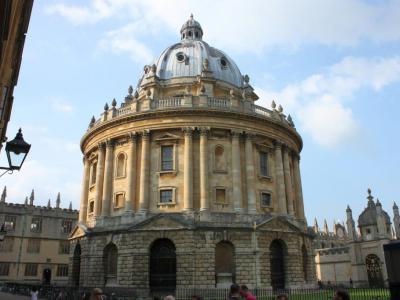 The Radcliffe Camera, despite its name, isn’t a camera at all in technical terms, but the first circular library built in the United Kingdom. Camera is yet another term for a chamber.

John Radcliffe was a royal physician, and when his intention to build a library at the University to house his science collection became known, several of the colleges argued among themselves about which of them should be honored with the building. In the end, none of them was in fact.

Several terraced houses on Cattle Street, the Black Hall and some outbuildings from Brasenose College were demolished to make way for the library. Built in 1749 by James Gibbes in the English Palladian style, from the outside it appears to have three storeys. The ground floor is rusticated; the first floor is divided into bays separated by ten pairs of Corinthian columns. Above this is the lantern and lead-covered dome.

Inside the building, the first floor is actually an open gallery around the walls. There is a 2 meter-high statue of John Radcliffe, sculpted by John Rysbrack. In 1912, an underground archives room was created with a passage connecting it to the Bodleian Library.

There are over 600,000 books in the Radcliffe Camera, which is now a reading room belonging to the Bodleian Library, and sadly not open to the public.
Image by -JvL- on Flickr under Creative Commons License.
Sight description based on wikipedia