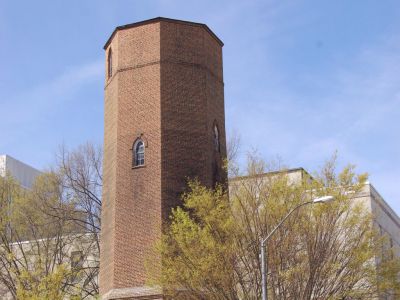 Before construction of the tower, most water in Raleigh came from private wells and cisterns. In the 1880s a municipal system was developed to address concerns of water quality. Water from Walnut Creek was drawn by a private company and was carried from a dam by pipes to a nearby pumping station. Water was forced by steam pumps through sand filters, and either into a reservoir on site or through pipes to the water tower downtown. A 100,000 gallon water tank sat on top of the octagonal tower.

By the beginning of the 20th century the water system was supplying the entire city, however, the increasing population of Raleigh created a need for more water supply. In 1913, the city bought the facility and built a larger dam upstream, removing the one built in 1887. By 1924 the water tower had been abandoned and its tank removed. Raleigh architect William Henley Deitrick purchased the facility in 1938 and converted the aging tower into an office building. Since then the building has been used as offices by various companies.
Image Courtesy of Wikimedia and Jmturner.
Sight description based on Wikipedia.