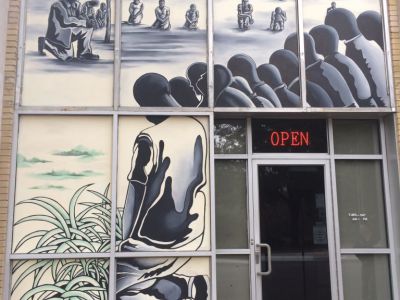 Savannah, Georgia, is an area with a rich and fascinating history in the civil rights movement. This museum is named after Dr. Ralph Mark Gilbert, a major figure in Georgia's civil rights history, and pastor of the First African Baptist Church. In the year 1942, Gilbert organized Savannah's branch of the National Association for the Advancement of Colored People, and has been referred to as the “father of Savannah's modern day Civil Rights Movement.”

The museum itself was built in 1914, and once served as the largest bank for African-Americans in its county, back when segregation governed virtually every public and private place in the deep South. After being a bank, it became the headquarters for Savannah's branch of the NAACP. Today, the museum houses historic photographs, art, and archives relating to Georgia's civil rights history. The first floor is created to be a replica of the luncheon in Levy's Department Store, a segregated lunch counter where one of the most famous sit-ins of the civil rights era occurred. In addition to the museum, the building also houses lecture halls, classrooms, and a library of African-American and civil rights books.

Tip:
Consider taking the guided as it gives better insight in less time than trying to read through everything on your own.