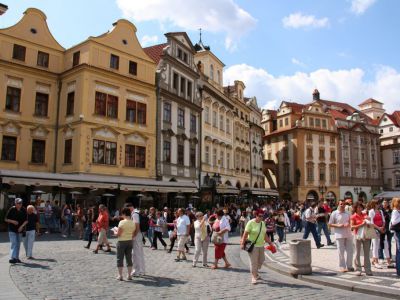 An ideal people-watching spot at the boundary of Old and New Towns, Republic Square marks the intersection of eight roads. Here you will find old and new architecture, street vendors, shops, banks, hotels, restaurants, along with historic sights, such as the Municipal House – an Art Nouveau masterpiece with its salons, reception rooms and concert halls, and the majestic Powder Tower which can be accessed by 186 stairs.

Once you have admired (and perhaps visited) the above-mentioned buildings, you can head to the Kotva department store – a high-point in Czech architecture of the 1970s and a great place to find jewelry, cosmetics, apparel and almost anything else you can imagine, complete with a terrace restaurant with glorious views.

Also in the square is the huge, 115,000 sq-m Palladium Mall that houses four floors of shopping and commercial galleries with over 200 stores and 30 cafés/restaurants. During the survey preceding the construction, archaeologists discovered foundations of several 12th-century structures which have then been incorporated into the Palladium architecture.
Image by Kham Tran on Wikimedia under Creative Commons License.