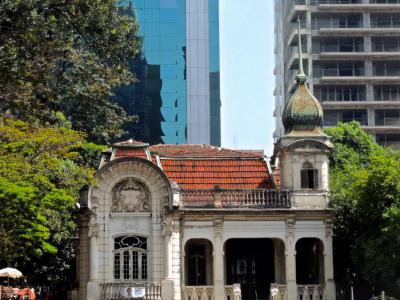 This elegant mansion is the only remaining home from the residential phase of Paulista Avenue. Between 1891 and 1937, wealthy São Paulo coffee barons, industrialists, and merchants built their exclusive mansions on the newest and trendiest avenue in the city. Colonel Joaquim Franco de Mello was a wealthy farmer, and the family occupied the mansion for most of the early 20th century.

The Residência Joaquim Franco de Melo was built in 1905. This eclectic style home is influenced by Louis XV-era European architecture. Rococo ornamentation, Rennaissance-style framed windows, a French-style turret, and Moorish-style towers all add to the mixture of styles and make a unique and captivating mansion.

Today, all of the other mansions along Paulista Avenue have been torn down to build skyscrapers and financial centers. The government listed the mansion as a historical property decades ago. The mansion then became a source of contention between the government and the de Mello heirs. The property fell into disrepair, and the beautiful exterior was covered in graffiti. In 2019, the family and government finally agreed, and the family transferred the property to governmental control.
Image Courtesy of Wikimedia and Haresdp.