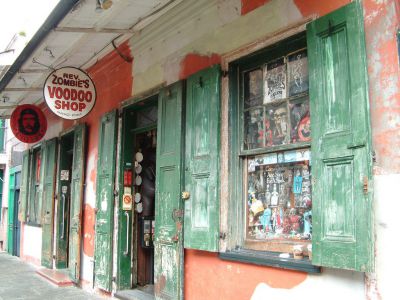 Virtually unchanged since the early 19th century, the location of fabled Reverend Zombie’s House of Voodoo is one of New Orlean's two shops (the other being Marie Laveau’s House of Voodoo on Bourbon Street) recreating the authentic mysterious ambiance of the old stores in the French Quarter which used to supply Voodoo practitioners with their mojo bags, herbs, and talismans. The admixture of tarot card readers, traditional African art, and Brazilian, Cuban and Haitian artifacts available here captures the early ethnic and spiritual diversity of the Quarter. Inside the three-room space, filled floor-to-ceiling with merchandise and props, you will find multiple altars (none to be touched!!!) and tiny, hand-written signs everywhere describing the objects, dropping witty notes to customers, and asking them to behave.

Found here is practically any book on the occult, plus tons of Voodoo items (dolls, masks, charms, spells, candles), and other awesome New Orleans relic and merchandise (taxidermy, statues, crystals, essential oils, tarot decks, t-shirts, and more) you can possibly look for, along with the instructions, if need be, on how to use it. You will also find a lot of weird souvenirs to amaze your friends and family back home with.

Tip:
Among their most popular spell kits are “Other Attorney Be Stupid” and “Hex Your Ex.”
For those interested, there is a prop-fence hanging from the ceiling that was used in “Interview With a Vampire.”
You are not allowed to take photos – seriously, just don't!
Also, don't touch any of the stuff you're not supposed to touch and be generally respectful to the house rules, and it will be ONE OF THE COOLEST places you've ever seen.