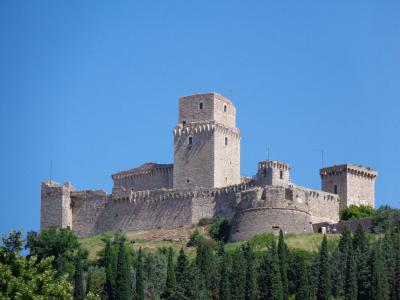 How old is Major Fortress? Tradition holds that the top of the hill was once the site of an acropolis, but it was destroyed by the Gothic King Totila in 545. The first reliable date available is 1174, when it was rebuilt by the Swabians as a feudal fortification. Frederick of Swabia resided there as a youth.

In 1198 the castle was destroyed in a popular uprising to keep it from coming under the control of the papal governor.

The fortress was rebuilt in 1356 by Cardinal Egido Albornoz who was busily involved in subjugating the major cities of the peninsula. The fortress was frequently a vital element in military campaigns of one sort or another. Towers and bastions were often renovated and improved.

It was Jacabo Piccinino who built the polygonal northwest tower. It was then finished by Pope Pius II who connected the tower by a corridor to the fortress walls. The castle complex is made with strengthened walls from the pink stones of Mount Subasio. The overall shape is trapezoidal with towers on each corner, enclosing the keep.

The inside of the fortress yields access to the entrance of a round bastion. The bastion was commissioned in 1535 by Pope Paul III. There is a fenced-in yard before the residential rooms of the castle accessible by a spiral staircase. The Rocca Maggiore is joined by its 14th century walls with the Fortress Minor, the keep of St. anthony.

The fortress's towers offer the broadest and evocative views of Umbrian valleys and Assisi nestling at the foot of the hill.

Why you should visit
It is worth it for the spectacular view alone.

Tips
Some climbing is involved. Wear comfortable shoes and carry water.
Image by Superchilum on Wikimedia under Creative Commons License.