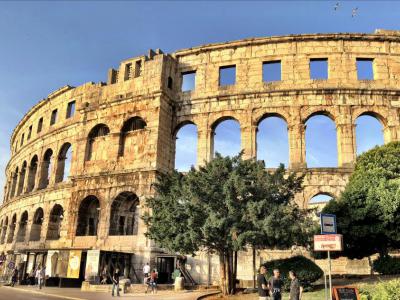 There are six large Roman amphitheaters in the world. The Pula Arena apparently is the best preserved and still in use. It is big. It is the only remaining amphitheater that still has its side towers, four of them, in good condition. It was constructed somewhere between 27 and 68 BC and it is the country's best preserved ancient monument.

The exterior walls are of limestone. The arena was built at the base of a hill, on sloping ground. For this reason, the seaward-facing side has three stories. The opposite side has only two. The maximum height is 96 feet. The lower two floors have 72 arches. The topmost floor has 64 rectangular, window-like openings.

The arena could hold up to 23,000 spectators seated. The arena itself had 15 gates. Underground corridors ran underneath the arena. Animals, ludi (games), scenery and gladiators could be conducted through the tunnels. The seating was raked. There was room underneath for shops and stores. The arena was on the Gladiator circuit.

Each of the four towers held fresh water. The water was perfumed and fed into fountains to refresh the crowd. Large sail-like cloths called valaria shaded spectators from the sun or rain. A system of channels and canals below the arena carried off rainwater or effluent.

The colosseum was outside the city walls, on the Via Flavia. Emperors Augustus, Claudius, Vespasian and Titus each had a hand in enlarging and improving the Amphitheater. It was finally finished in 81 AD under the reign of Titus. The amphitheater was in popular use until the 5th century, when the Emperor Honorius forbade gladiatorial combats.

The arena today is a venue for concerts, operas, ballets, sports and the Pula Film Festival.
Image Courtesy of Flickr and aiva..