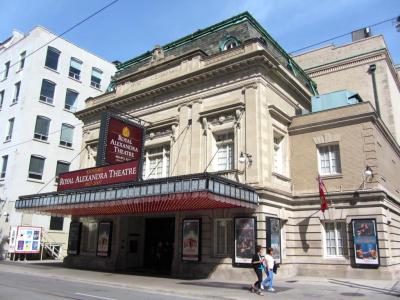 The Royal Alexandra Theatre in Toronto, commonly known as the Royal Alex, is the oldest continuously operating legitimate theatre in North America, established in 1907.

Built in the style typical of 19th century British theatres, this 1,244-seat, beaux-arts style, proscenium-stage venue has two balcony levels. Its construction began in 1905 and was completed in 1907. Since 1963, the theatre has been owned by Ed Mirvish Enterprises, a company established by Toronto department store owner Edwin Mirvish. Since 1986, it has been managed and operated by Mirvish Productions, the theatre production company headed by Ed's son, David Mirvish. The "Royal Alex", otherwise referred to as simply "the Alex" or "the R.A.T.", is named for Queen Alexandra, a Danish princess and wife of King Edward VII, the great-grandmother to the current Queen of Canada, Elizabeth II. The theatre received letters patent from Edward VII entitling it to the royal designation. Its present owners believe that it is the only remaining legally "royal theatre" in North America.

In the words of David Mirvish, the $2.5-million renovation of the theatre commenced in 2016 was intended to "once more restore and give life to that sparkle and give a level of comfort that will preserve the theatre as our flagship of the 21st century". The most significant change was the refurbishment of its seating areas to improve audience comfort, with the replacement of its original seats with modern versions that are larger and arranged to increase legroom. The new seating layout necessitated a reduction in capacity from 1,497 to 1,244; David contrasted it to the trend of theatres increasing their capacity to "maximize" revenue, arguing that the improved amenities would build improve customer loyalty and encourage repeat visits.
Image by Richie Diesterheft on Flickr under Creative Commons License.
Sight description based on wikipedia