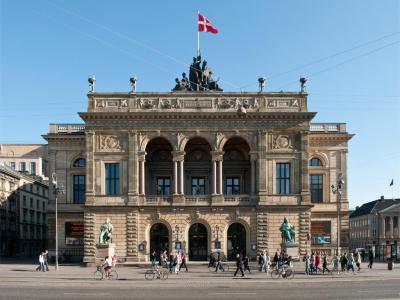 Although a new ultramodern Opera House was inaugurated across the canal in 2005, this Baroque-style creation, dating from 1874, was for years the country's main national performance venue, hosting opera, ballet and drama under one roof – though today it is largely used for ballet. Initially the theatre of the king, it is the grandest building on Kongens Nytorv square, having certainly retained a unique atmosphere with its historic ceiling paintings high above and the stunning big chandelier in the theater hall. Outside the main entrance, the statue on the left depicts Adam Oehlenschläger, an author of tragedies, while across from him is the image of Ludvig Holberg, a satirist whose comedic works are still popular.

Besides seeing a production here (try booking in advance for best seats), you can take a 90-minute tour during the daytime and thus get the opportunity to step in the royal box, visit the wardrobe room where costumes are made and fitted, and stand on the stage. It's all very affordable and could even be one of the highlights of your trip!

***HANS CHRISTIAN ANDERSEN'S COPENHAGEN***
As a dreamy, penniless 14-year-old, H. C. Andersen has tried his luck as an actor, singer and dancer here, though the audition was, by all accounts, a fiasco. He soon turned to writing, but his early plays were turned down, too. Fortunately, in his third year of big city dwelling, the head of the theatre arranged for Andersen to attend grammar school in other parts of Zealand for the next five years. This helped him get a place at Copenhagen's university, where his writing really hit its stride.
Image by Axel Kuhlmann on Wikimedia under Creative Commons License.